Ukraine is the second largest contiguous country on the European continent, after the Russian Federation. Ukraine is also one of the hosts for the Euro 2012 games. However, you all know that by now, and I think it’s more important to talk about how awesome Ukraine is. 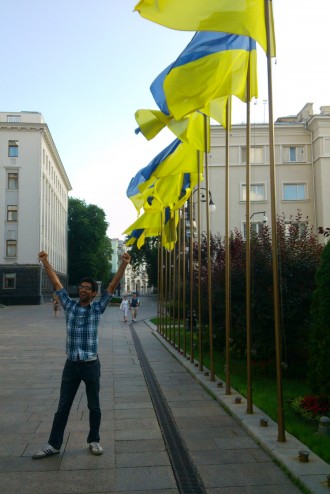 Historically, Ukraine was part of different empires in the past. Ukrainian territories were under the rule of three external powers—the Golden Horde, the Grand Duchy of Lithuania, and the Kingdom of Poland. After the Great Northern War (1700–1721) Ukraine was divided between a number of regional powers and, by the 19th century, the largest part of Ukraine was integrated into the Russian Empire with the rest under Austro-Hungarian control. In essence, they were always owned. 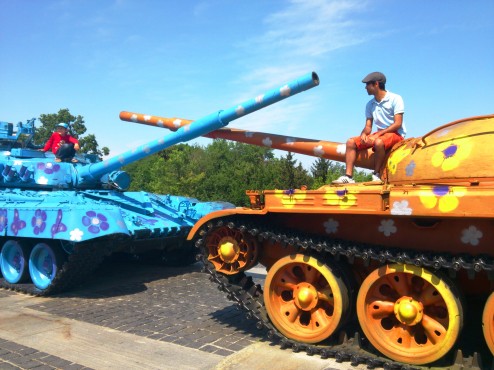 We declared war, but we were too fabulous to continue 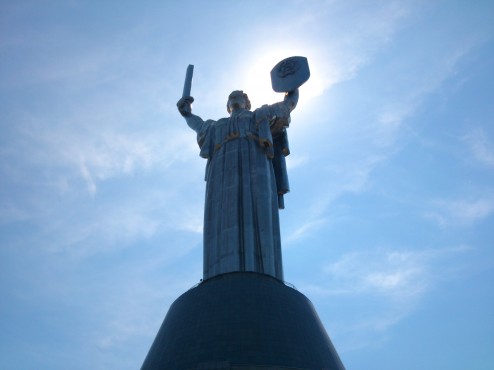 Mother Motherland Monument - This monument is even bigger than New York's Statue of Liberty!

Ukrainian is the official language of Ukraine, and Russian is also widely spoken (and trust me, it’s for the best to speak Ukranian over Russian). The younger people speak English quite well. So, you won’t get really lost in translation.

Ukraine remains a globally important market and supplier, particularly, the world’s third biggest grain exporter. In Soviet times, the economy of Ukraine was the second largest in the Soviet Union, being an important industrial and agricultural component of the country’s planned economy.

The dominant religion in the country is Eastern Orthodox Christianity, which has heavily influenced Ukrainian architecture, literature and music. 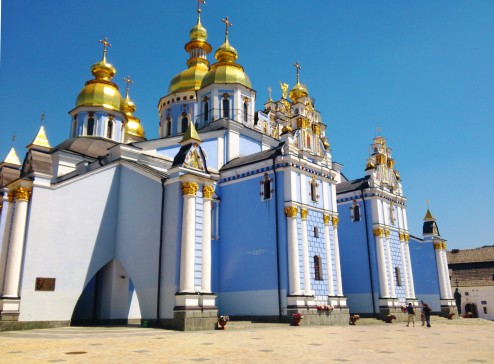 One of the Orthodox Churches in Kiev

According to the Ukrainian constitution, access to free education is granted to all citizens. Complete general secondary education is compulsory in the state schools which constitute the overwhelming majority. Free higher education in state and communal educational establishments is provided on a competitive basis. Because of the Soviet Union’s emphasis on total access of education for all citizens, which continues today, the literacy rate is an estimated 99.4%.

And of course, you can imagine that at present Ukraine is its own country after the fall of the Soviet State in 1991, and things have gradually shifted to modernize Ukraine. I spent most of my days in Kiev and Dnipropetrovsk, so, let’s shift gears!

Kiev or Kyiv (Ukrainian: Київ; Russian: Киев) is the capital and the largest city of Ukraine. It has a very sophisticated infrastructure, which is quite modern, tons of soviet era type buildings in its outskirts and also a few buildings that survived from the 18th century and older.

To dispel any misunderstanding about Ukraine and stuff, it’s a safe country, and only if one acts like a fool, drunk and quite stupid would end up in the wrong side of things (much like anywhere else in the world). Of course, during the Euro 2012 games there was an increase in the number of police around the city. However, in essence, the citizens of Ukraine are extremely hospitable and quite friendly. So, avoid listening to your media sources, and do plan a visit to Ukraine.

However, Ukraine does suffer from corruption and poverty. From what I’ve learned is that even though it is very cheap for those from the West to visit Ukraine, the cost of living (more specifically rent) is highly rigged. In addition, political unrest is present due to the jailing of the previous Ukrainian Prime Minister, Yulia Tymoshenko. 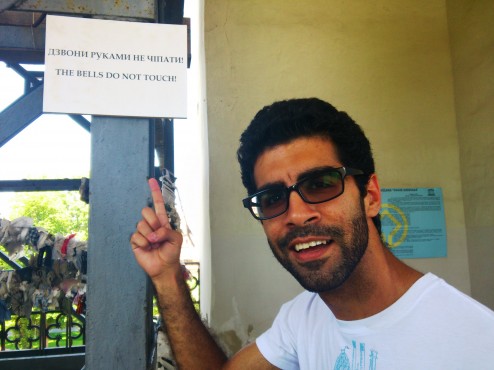 Despite the hardships, there are Ukranians who are fighting to bring justice, freedom and progress for their nation. And Ukranians are quite patriotic about their culture, identity and people. Most of the Ukranians I’ve met are highly educated individuals with great vision whose aim is to work for the benefit of not Ukraine alone, but for mankind.

Consider Ukraine as a country in your list of countries to visit. It is honestly among the most beautiful places historically, culturally, and definitely great for legit Ukranian food 😀 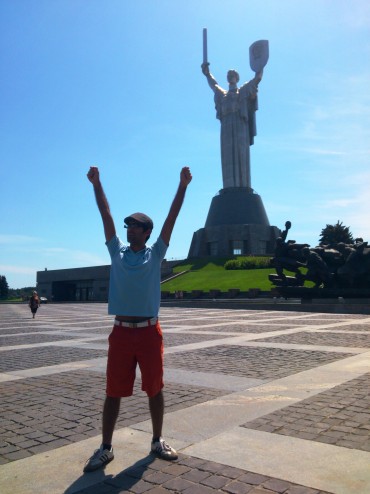 In Soviet Ukraine, Adib Comes To You!

Poland and Ukraine are the hosts of the Euro 2012 games. The games are held at 8 stadiums that are distributed between these two nations that hosts the soccer matches.

For Poland, they are:

And for Ukraine, they are:

The Sun newspaper provided a nice infographics of the stadium and their capacity, this can provide an idea of their capacity and shape:

Each stadium is unique and beautiful in design and architecture. My journey in Kiev gave me the opportunity to visit one of those massive and beautiful stadiums; the Olimpiyskiy National Sports Complex, or simply Olympics Stadium. The stadium is the premier sports venue in Ukraine and the second largest in East Europe after Moscow’s Luzhniki Stadium. The complex also features several other sports facilities and is designed to host the Olympic Games (the stadium hosted some football matches at the 1980 Summer Olympics).

The first match that I attended for the Euro 2012 in Kiev was the Sweden vs. France match. For that game, I was supporting France because I assumed France’s reputation and performance will still last against the Swedes, and the Swedes have so far been defeated twice. But I was wrong…

Before entering the stadium, I visited the area around the stadium to get an idea of how massive it is. My conclusion: It is massive! Not to mention, the architecture was beautiful. The exterior of the stadium is lined with great symmetry, and its height gave it a unique sense of majesty as it scratches the sky with its greatness.

The following is a video of me walking around the stadium:

The cafes and bars surrounding the stadium were FULL of football (or soccer for your Americans) fans, and this only happens during the games. I’ve visited the area when there are no games, and it is more packed with tourists who come there to see the massiveness of the stadium and weep to the fact on why they haven’t bought EuroCup tickets.

One encounter around the stadium was a group of Brazilian fans that were singing in the cafe and preparing for the beautiful evening. Cool thing about this is that Jenia, my beautiful host, and I have met few Brazilians prior to arriving to the stadium. And one of the Brazilian fans told me that he will be performing in a cafe before the match. I didn’t expect to see him again, but lo and behold, here he is singing songs in one of the cafes:

Hours have passed, and adrenaline is pumped in my veins. I am finally ready to rock out! My dear co-host, Yulia, and I head to the Olympics stadium ready to watch the amazing game. The lines to the stadium were long, but they have organized the entry points pretty well to allow a good influx of fans to enter the stadium:

Walking past the check-point, it was all celebration and partying. There was face-painting, people dressed in carnival clothes, marching bands, and everything you can think of that falls in line the concept of carnival, celebration or things to do before watching an amazing football match!

In the stadium, I was seated next to the Swedish fans. The concept of supporting France is now distant in my mind like Pluto and the Sun. The fans were roaring! Chanting Swedish songs, Seven Nation Army (White Stripes), or their national anthem. Of course, there were “boo’s” when France got close to the Swedish goal-post.

What was impressive for me is that during Half-Time, they water the field to make the field more moist and playable (I assume so):

At the end of the game, people headed home in festive mood. I admired the fact that people were calm and had maintained civility; unlike what the media loves to publicize. Therefore, don’t trust what the media says all the time 🙂

Below are videos from the Italy vs. England game. I was supporting Italy with the English fans on my left. It was a wonderful experience. Here is a video of us doing the wave!

You can see more videos of my trip, including the videos from the stadium, here: Goal to Euro Playlist

I hope you enjoy this post and I’m looking forward to share more with you all about Ukraine, soon!