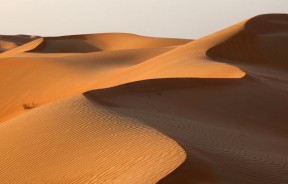 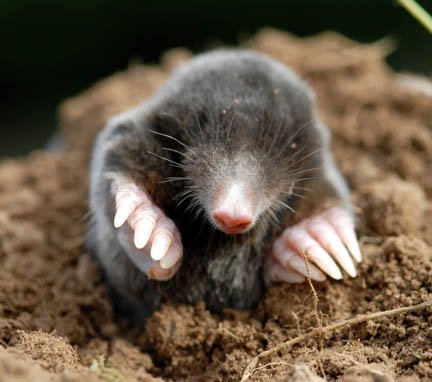 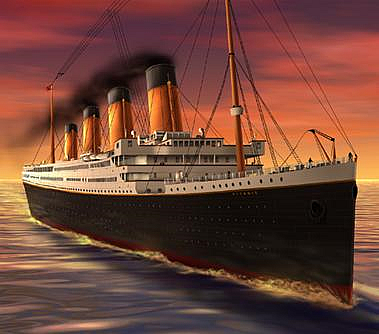 The Titanic can be considered a Tension Boat

The title may be misleading; one might think it is a very painful cruise ship vacation experience. However, today’s experiment will focus on surface tension of water and how we can use this property to propel objects on water. Surface tension can be seen everywhere in nature. Some examples include:

A tension boat is basically a boat that utilizes the property of surface tension of water to propel itself in water. You might think that you can gain infinite propulsion force by placing ships in the ocean with enough material to harness this force and have green energy. But, it’s much more difficult than that, and I don’t think carrying gallons of soap and ocean water would work that easily.

What is Surface Tension

The straight up definition: The cohesive, or attractive, forces between liquid molecules causes surface tension.

Let’s consider the following image of a water molecule: 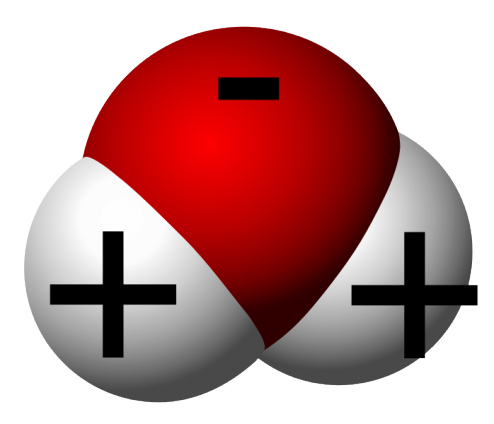 When Hydrogen gives away (shares out) their electron, it becomes positive (it hates being negative; imagine Hydrogen as someone high on life). On the other hand, Oxygen is like negative nancy or debbie downer, always negative and LOVES to get (or borrow) electrons.

And that, ladies and gentlemen, is how we have suface tension!

Make a small boat out of cardboard, place in water, add a drop of soap at the back-end of the boat, and watch that thing go!

So, you know about surface tension at this stage, and you noticed before you dabbed the boat with soap that the boat was still (unless your sink or whatever you used is so dirty and your boat went berserk, you dirty person you!).

The reason why the boat is still when placed in water is because the surface tension on the surface of water is acting on “all-directions” on the boat.

Let’s examine the property of soap. Soaps are compounds which are made by heating fats or oils, from animal or vegetable sources, with lye. A typical soap molecule has the formula:

Soap belongs to a class of chemicals known as surfactants, from surface active agents. As yours parents said, soap have some special properties which make them very useful for cleaning and forming bubbles and foam. In particular, the long hydrocarbon (All that C’s and H’s on top) ends of the molecules are very nonpolar and do not form bonds to water molecules. This end is hydrophobic (water fearing). On the other hand, the ends are very soluble in water and form rather strong bonds with the very polar water molecules. Those are hydrophilic (water lovin’).

When soap is placed at the end of the boat, the soap molecules order themselves in the position that will distort the surface tension of the water. The water molecules on the surface of the pool of water will lose their adhesiveness to each other because of the hydrophilic part of the soap. On the other end, water molecules are distancing themselves from the tail of the soap molecule. This can be shown in the following graph:

Based on such interaction, aggregate effect of all forces will be “frontward” rather than “all-direction.” Such effect creates propulsion. Thus, you are capable of making the most awesome soap propelled speed boat!

What is a Non-Newtonian Fluid?

A non-Newtonian fluid is a fluid whose viscosity is variable based on applied stress, or force. Contrast with Newtonian fluids like water, whose behavior can be described exclusively by temperature and pressure (water at -32F/0C turned into ice, or water can be heated over it’s boiling point under high temperature), not the forces acting on it from second to second. Non-Newtonian fluids are fascinating substances that can be used to help us understand physics in more detail, in an exciting, hands-on way.

If you punch a bucket full of a shear thickening non-Newtonian fluid, the stress introduced by the incoming force causes the atoms in the fluid to rearrange such that it behaves like a solid. Your hand will not go through.

If you shove your hand into the fluid slowly, however, it will penetrate successfully. If you pull your hand out abruptly, it will again behave like a solid, and you can literally pull a bucket of the fluid out of its container in this way. You can try and walk on a non-Newtonian fluid if you stomp as best as you could on the surface.

A shear thinning non-Newtonian fluid behaves in the opposite way; where the application of force will make the solution act more as a liquid. In this type, the fluid becomes thinner, rather than thicker, when stress is applied. Also called pseudoplastic, examples of this type of non-Newtonian fluid include ketchup, toothpaste, and paint. The effect doesn’t usually last for long in either type, continuing only as long as the stress is applied. A good example is shaking the shaving cream can so the cream can be released from the can.

A practical application for shear thickening non-Newtonian fluids may be in body armor of the future. Since such fluids are usually flexible, they would allow soldiers to move freely when not under attack. But if confronted with a speeding bullet, they would quickly harder, performing like traditional armor. More research is necessary to see if non-Newtonian fluids are suitable for the military, but until then, it’s sure fun to play with.

Mix corn starch and water to create a non-Newtonian fluid. When left alone it will act like a liquid but when acted upon by a force it will react like a solid. If you hold it in your hand it will run through your fingers but if you punch the fluid it will harden

Put water in a big bowl/container you adding corn starch until the water becomes extremely tough to stir. It has also been described as a syrupy texture, but you should be able to feel a difference. If you are not sure, you can test it by applying pressure with the poke of your finger or a spoon. You will feel and initial resistance by the fluid and then it will slowly release.

Experiment 1: Texture is Dependent on Ingredient

You will notice if you leave the fluid unattended for a spell, it will separate into two parts and solid will be on the bottom of the container. Simply mix it up once again to regain the non-Newtonian fluid texture.

As you poke and prod at the mixture, you can see and feel (if you use your hands) the mixture turning solid into liquid or vice versa. Get hands on! The texture is great to feel and will keep you occupied for hours on end!

After messing around for a bit, add more corn starch. This results in a more solidified liquid and you can better feel the reactions.

The first additional experiment that was tested was by microwaving part of the fluid. I put it in the microwave for roughly 45 seconds on half power (5, in my case). This resulted in what looked like an egg-shaped object, with a yellow center and a white outer ring.

In this experiment, I put a cup of the non-Newtonian fluid into a freezer to see the effects. After leaving it in there, it was examined later. It had some cool line patterns on the surface like it was exerting tension or something of the like.

Place the non-Newtonian fluid on a speaker that is protected by a layer of plastic. Play different sound frequencies and enjoy the patterns made by the fluid.

“After playing with my mixture a while, I started adding a lot more water then immediately microwaving it. Its almost like ballistics gel now.”

“blow bubles in it with a straw! they aren’t normal”

– WiseGeek – What is a Non-Newtonian Fluid?